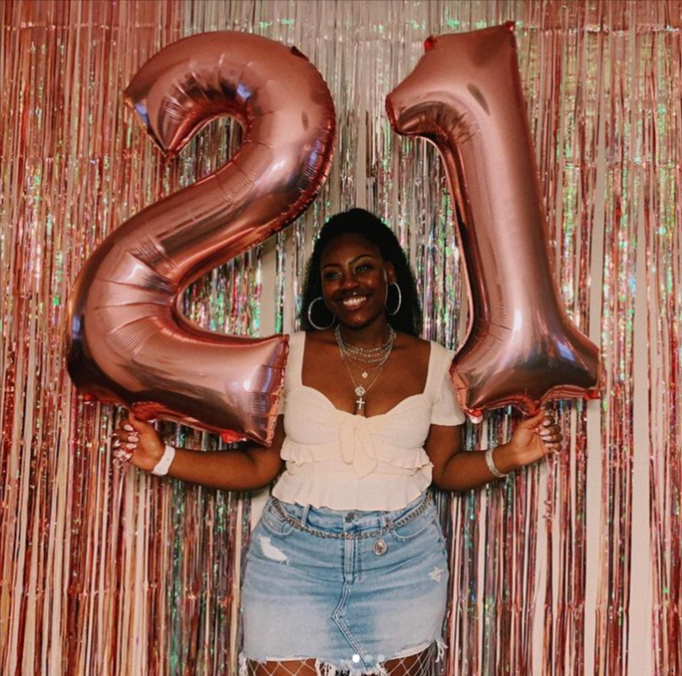 Turning 21 during a pandemic is the hardest thing I’ve lived through, and the times don’t seem to be letting up.

It’s challenging to find my footing as I transition from young adulthood through college graduation. But it gets easier as soon as I plug in my headphones and turn the volume up on any of these artists.

If R&B had a face right now, it would be H.E.R.—originally the mysterious girl on popular social sites, H.E.R. has taken fame in stride and given direction to the new era of R&B. We still don’t know who had the beat to the song “Jungles,” first (H.E.R. or Drake?) and that’s only the start of what she’s given the industry.

The 21-year-old Alabama-born artist Flo Mili surprised us last summer with the release of her first studio album, “Ho, Why Is You Here.” Her bops are in keeping with the trend of the female takeover in rap: making you feel good while out with your bestie or dancing at home in your room. Not many straight artists can incite ‘shake ya ass in the mirror’ behavior for me, but Flo Mili definitely does.

After her song “Love Songs” went viral last year, Kaash Paige made a name for herself amongst other dreamy rappers like PARTYNEXTDOOR and 6Black. Her sound is different, though, as she speaks to the ‘girl on girl lovin’ community. Kaash Paige is giving a scope into a world that’s rarely been given this microphone before.

Khalid feels like someone that I’ve experienced late adolescence and early adulthood with, personally. There were times in high school I wasn’t alone because of his album, “American Teen.” Every bad feeling I’d had as a teenager—being stuck at home, pointless assignments, a waste of time—came back amplified this past year, through COVID. But, through music, Khalid always makes Gen Z feel seen through vulnerability and relatability.

Playing their own instruments, making their own beats, writing their own songs, and producing their own music ensures sisters Chloe x Halle will be around in music for a long time. I’ve enjoyed evolving with them as they sharpen their craft. Chloe x Halle inspires me to continue to create music as I take on other endeavors. The fact that they produce in-house made me start making music in my room. As a result, I found my ‘thing,’ so that was nice.

Now a staple in the heartbreak R&B club, Summer Walker made her debut on my ‘sad girl’ playlist with her song “Girls Need Love.” Her first studio album, “Over It,” finds its way into my rotation consistently (and it never gets old).

Arguably my favorite MSFT, Rico Nasty, gives me the perfect energy for any occasion. Whether that be raves (post-corona ofc) or screaming along to “Smack A Bitch,” there will always be room for Rico Nasty in my heart. Rico helps connect two communities with her screamo rap and indie/alt songs, so she’s spot-on for almost all my playlists.

Breaking out last summer with a chart-topping collaboration with Drake, this is only the beginning for Giveon and his journey as an artist. Seeing the world recognize his promise helped me feel a little more promising myself as I *cringe* think about my’ 10-year plan.’

There aren’t enough words to express the forever gratitude I have towards this artist. Kehlani was one of the first people—for us Gen Zers—that made it feel safe to be a little bit different. Kehlani speaks to an entire generation of bi girls, and we’re forever thankful for that contribution. Affirming. Honest. And the first track on my playlist, “It’s Okay To Be a Little Gay.”

The catchy tunes that Tai Verdes produced last summer were the perfect quarantine antidote. Although we were stuck inside, his songs “DRUGS” and “Stuck In The Middle” gave an escape from reality, and into the main character mode of my personal coming of age story. Nothing else could do that at the time.

Normani represents so much for me as a dark-skinned, Black woman in entertainment. Once linked to Fifth Harmony, Normani has made a name for herself in the music industry and has become one of the prominent faces of the new sound for R&B and hip hop. Rooting for her always.

In the mirror at home or (safely) out with the girls, Mulatto is one of those artists who always accompanies a fun night. With the current vitality of the south, everything in the future is Black, southern, and female. Mulatto is one of those at the forefront. This has rightfully earned her validation from trap music royalty like Gucci Mane, who laid a verse on her most popular song, “B*tch From Da Souf.”

There’s nothing I love more than a good driving song, and Rod Wave provides an entire album of them. The sing-song rhythms of his rhymes guided me through a break-up over the quarantine summer. Before I could find the words to describe navigating a ‘situationship’ and ‘not really but kinda dating,’ Rod Wave had the words I needed.

WILLOW is an artist that has helped me through a lot with Black queer identity, and my journey with her music feels like one we’ve taken together. Willow has always been true to herself, and her growth as an artist and activist makes her easy to love. And really, with this one, the gays win.

The soul sister of my era. Her journey of self-love and confidence has helped me figure out my definition of ‘sexy.’ Ari Lennox is often singing through my speakers, and her classic sounds mixed with 21st-century problems have been the perfect antidote for my quarantine blues.

There have been so many times that I’ve cried while driving and blasting the song, “Yes, I’m Changing.” For the past four years, Tame Impala’s translucent journey with his music is one that you can apply to your life at any time. Because of this, “Yes, I’m Changing” has been a very relevant theme with all the transitions happening. I rarely get through a day without listening to Tame Impala.

I’ve listened to The Weeknd since I was in middle school, and 10 years later, I still connect with his music. With every album came a phase, and his phases matched mine every single time. In addition, his influence on Gen Z culture provided us a lot of self-expression at an early age (the boomers may say a little too much).

King Princess has been one of the few artists in my playlists that stays true to queer representation in every aspect. She’s one of two artists that I survived on during my sophomore year in college. Lots of those ‘feels’ came back last year, and again I relied on her music.

Kali Uches is true in her art and uses the tunes of music for self-expression. Each project dropped is sure to be different from the last, and they feel like nostalgia. The first time I heard her was my first time visiting IMANIGOLD in New York, and I’m thankful her hypnotic melodies bring back memories from that experience.

Frank Ocean gives human emotions a whole new meaning. Each ride you take listening to one of his albums feels like an experience you can enjoy on a high frequency. Frank Ocean was the only artist I could cry to for a very long time, and it’s because his music-making style of storytelling mixed with airy tunes makes it easy to escape and ‘feel the feels’ at the same time.

Gone too soon and forever in our hearts. Pop Smoke changed the rap game and wholly rewired the sound of east coast hip hop. His influence is—dare I say, timeless. Much like Jay-Z during his time, It’s “The Brooklyn Way.” Pop was one of the first tragedies of a very long, exhausting year. We were the same age when he passed, and that event startled me into thinking about what I want from life. Rest easy, Pop.