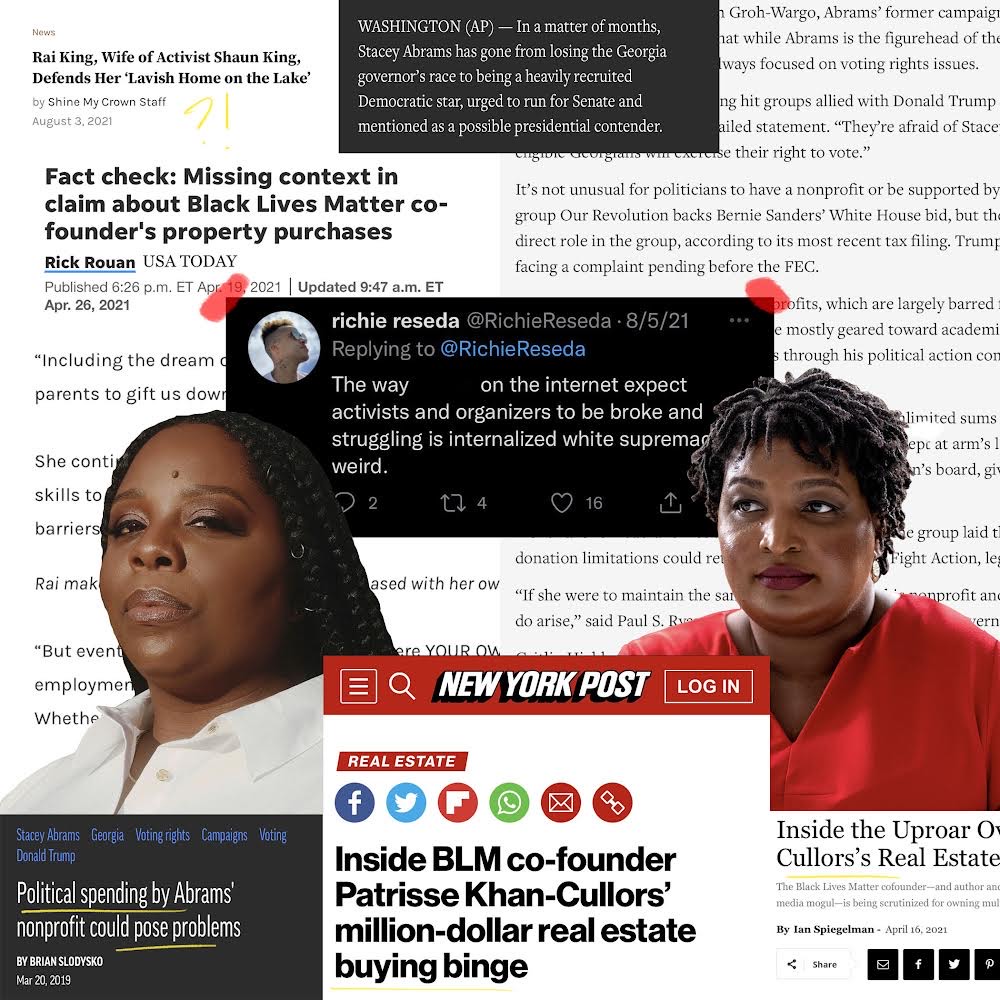 I’ve heard a lot of talk about how Black activists and organizers should be broke and struggling. Social justice leaders like Stacy Abrams and Tamika Mallory are often vilified for the money they make and how they spend it. That is white supremacy.

This is how it works:

I have seen this happen to organizers time and time again—like with Patrice Cullors and now Rai King, a professor and wife to controversial activist Shaun King. Regardless of the political criticism directed at Shaun (some of which I share), this is not okay.

Yes, poverty pimpin’ is real, and sometimes people use social issues to elevate their platform instead of the other way around. We should be vigilant, transparent, and accountable around this issue. We need to openly discuss how to relate to power in the movement ethically, but that’s not what’s happening here. What we’re experiencing is our internalized white supremacy and patriarchy convincing us to vilify black women rather than ask questions.

“We need to openly discuss how to relate to power in the movement ethically, but that’s not what’s happening here.”

Instead, we should stop expecting Black women organizers—and Black women period—to be our broke servants. We should learn to ask questions. Who wrote or published this article and why? Who are their sources? Let’s center freedom over wokeness. Having the hottest take on Twitter don’t get no one free. Go organize somethin’. We need to focus on collective financial literacy so we can understand forreal when someone is playing us and pimpin’ the movement.

Richie Reseda questions concepts of patriarchy while inspiring powerful conversation about topics in cellblock feminism, mass incarceration, and restorative justice. Richie is a co-founder of Initiate Justice, a non-profit founded during his 10-year sentence in California state prison for a crime he committed as a teenager. He encourages others, especially those directly impacted by incarceration, to get involved in grassroots legislative efforts aimed at ending punitive justice systems and investing in people, communities and restorative means of reducing harm.