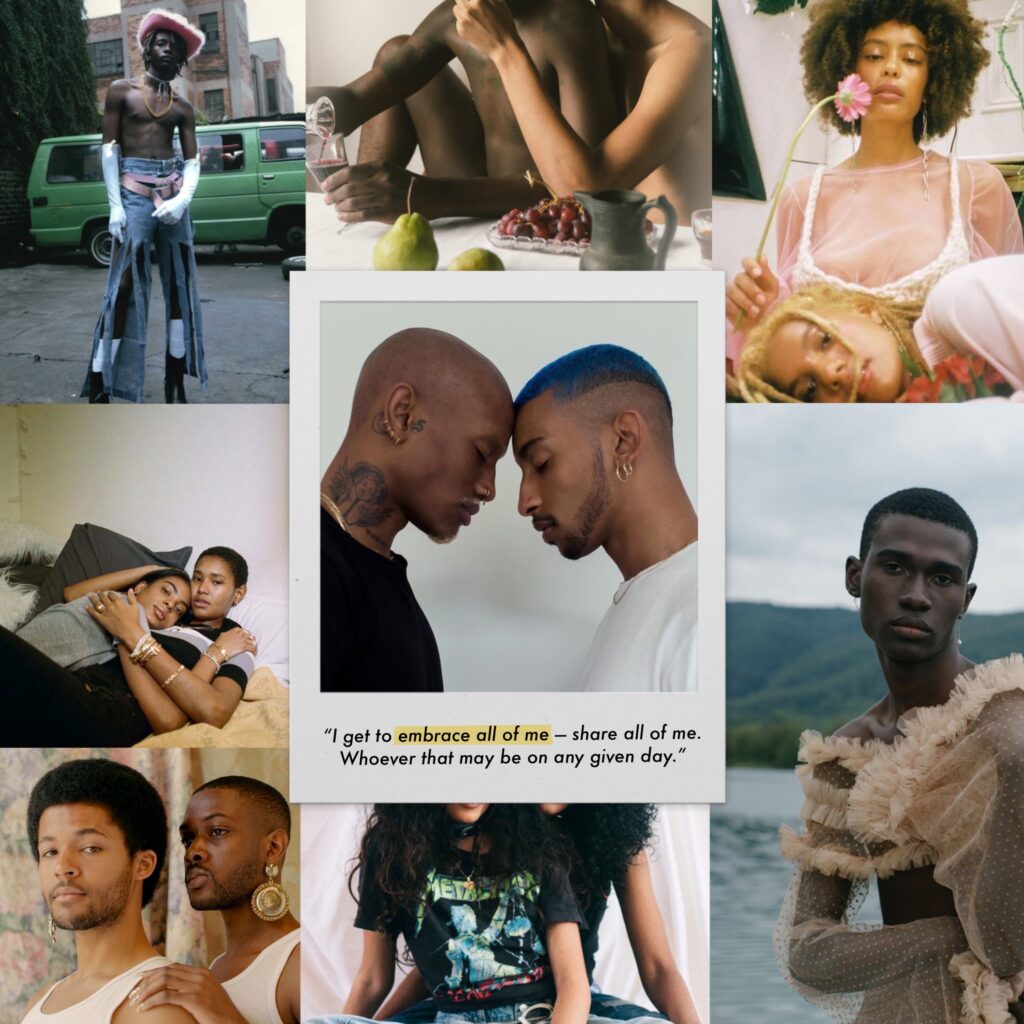 Now more than ever the impact of gender biases on the evolution of modern society is being investigated. From an increase in the marketing of unisex fashion to the normalization of inclusive language around gender identity in professional environments. These small shifts in our cultural practice are reflective of a much more powerful push against the gender binary and its conditioning.

This week I had the chance to connect with two incredible humans and friends of the blog identifying themselves within the fluidity of the LGBTQ+ spectrum. In between laughs, we discussed the relationships they have to their gender expression in a historically heteronormative world.

Due to the personal nature of this subject matter, names have been changed to protect the identities of our interviewees.

SF: Thank you both for sitting with me today. Starting off, for those who don’t know you ⸺ what are your pronouns and how would you define your gender expression?

River: I identify as gender non-conforming and my pronouns are He/Him.

Kai: My pronouns are she/her and I really don’t think I’ve ever thought about this before now. As a femme woman, I love to dress in a way that makes me feel—for lack of a better word—pretty when I walk out the door. It’s the way I carry myself and that can differ depending on the day. Some days I’m feeling super “girly” and walk around hips swishing and hair flipping. On days when I feel more masculine, that’s the energy I carry. I like to dress/act/present myself based on how I feel and that’s how I define my gender expression.

SF: I love how intuitively you express your gender identity. It’s so deeply individual. With that in mind, how do you think your unique gender expression relates to your sexuality?

River: I definitely feel like it allows me to be more fully myself. Being able to tap into all of the energies that exist within me. I’m not forced to be someone I’m not or feel something I don’t. I get to embrace all of me — share all of me. Whoever that may be on any given day.

Kai: I don’t know…as someone who’s sexually attracted to people who identify as women, I think it can be hard. My gender expression is very external and I think the way I dress and carry myself most of the time throws the women I’m interested in off. I like pretty ass women and most of the time they are not checking for other pretty ass women — but that doesn’t stop the gravy train. I won’t alter the way I present myself for the convenience of others. The right people will find me.

SF: You are preaching to the choir my friend and I think that’s a great transition into my next question. So many of those assumptions by other people are tied to how they view relationship dynamics and masculinity vs femininity. How do you view the relationship between masculinity/femininity when it comes to sexual expression?

River: I would say that it all depends on societal perspective because what is masculinity and what is femininity? To me it’s nothing. I’m non-conforming so I don’t adhere to whatever definitions exist out in the world. However, I do think that masculinity in terms of sexual expression tends to be coded as more aggressive and direct while femininity embodies a flow and a softness. But it’s not black and white. There’s so much more in between.

Kai: That relationship for me is a very fluid one. I embrace that directness attributed to masculinity and the softness of my femininity in the way I connect to people. I’m a huge flirt so if I’m into you — I’ll bat my eyelashes and give a coy smile but I’m not breaking eye contact. When it comes to sex, society has taught us that dominance is a masculine thing and submission is feminine but I be feeling SUPER feminine when I’m in control. I don’t know how to describe it but it changes often which is why I said that relationship is a fluid one for me. I agree, there’s so much in between.

SF: It’s interesting that you both associate similar traits with masculinity and femininity. If you could change one thing about how relationships are viewed in this society, would you start with those terms?

Kai: I think If I could change anything I’d wish that as a society we didn’t relate masculinity and domination or femininity and submission. I think on one hand those associations can be harmful and on the other those relationships should be up to the individuals involved. They decide how they want to express themselves and what that means. It’s definitely a part of a deep stigma in the alphabet mafia. We buy into these labels like top and a bottom or dorm and sub, but it would be nice not to have them. We should just be sexy individuals doing sexy things with other sexy individuals.

River: I’d like to change everything about relationships from the dawn of time. When you think of Adam and Eve, you just know there was a woman and a man and you don’t think twice about it. But what if there was more? That story is the root of so many of these gender and sexual norms. That’s where it started. But if you really think about it—what does that story mean? Who told that story? Who wrote it? These rules didn’t make themselves.

These rules didn’t make themselves. They have been shaped and changed over time just like any others. LGBTQ+ representation in mainstream media and government is being rallied for as a necessary part of social reform. Public forums on gender inclusivity and sexual exploration are pushing cultural boundaries and defining political movements.

These cultural conversations go far beyond definitions of masculinity and femininity — they’re targeting the very nature of how we make space for and embrace one another as a society. Thankfully, people like Kai and River are at the forefront of these conversations. Rewriting the rules that have for far too long kept people from being their most expansive selves.